To commemorate the 50th Anniversary of VE Day, the Fund organised an extra special outing involving Her Majesty The Queen; 6 vintage taxis; 100 modern taxis; 300 disadvantaged children; 6 Chelsea Pensioners from the Royal Hospital; Metropolitan, City and Royal Parks Police; The Tower of London; The Lord Mayor of the City of London; The Army and London Zoo. The start of this commemorative outing was from The Tower of London – another first for the charity. The convoy of taxis drove through the forecourt of Buckingham Palace where Her Majesty the Queen honoured us by taking the salute accompanied by music from a military band. Then it was onto Hyde Park to watch the Major Generals inspection of the Household Cavalry. The West End was brought to a standstill. 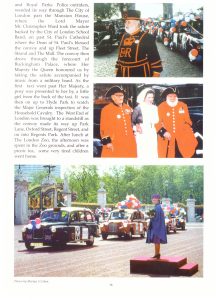 Her Majesty the Queen taking the salute