After a break of 10 years, the Taxi Safari outing was reinstated. The outing was sponsored by Westminster Motor Taxi Insurance and the format was similar to previous years. Separate convoys headed to the Scratchwood Service Station on the M1 Motorway where light refreshments were taken, courtesy of Trust House Forte. Once at Woburn, the children were taken on a trip around the Safari Park. 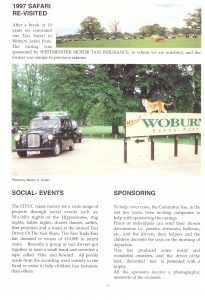