London Cabbies Stuart Lockhart 47 and Lynsey Lockhart 45 married in July 2019 in Scotland.  Stuart has been a cabby for 16 years and Lynsey for 8 years and they met in their roles as cab drivers. Recently they climbed in the Atlas Mountains as part of a holiday to Morocco and they were hooked on the alure of the mountains and wanted a bigger adventure. 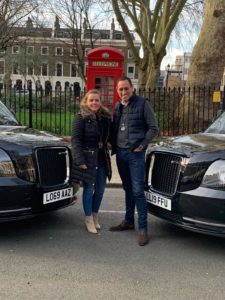 They had both followed the journey of the fundraising group “Cabbies do Kilimanjaro” as they raised over £18,000 in 2019 for the Taxi Charity for Military Veterans and when the group announced a fundraising challenge for 2020, Stuart jumped at the chance to join. Lynsey ‘s decision was not so quick and after contemplating how gruelling the six day climb would be and watching celebrities, including Cheryl, climb the same mountain for Comic Relief, she decided that she wanted to challenge herself and join Stuart and the other cabbies.

Stuart and Lynsey will be joining thirty other London cabbies who will climb Kilimanjaro this October to raise funds for The London Taxi Drivers Charity for Children and a Children’s charity in Tanzania.

Although they are both relatively fit, they do not underestimate the additional fitness and stamina training they will need to have a chance of summitting the mountain and will be attending regular Be Military Fit sessions in Greenwich park.

Stuart Lockhart said, “Valentine’s Day is my birthday and seemed the perfect day to announce that Lynsey and I will be joining this fundraising challenge. It’s a real privilege to be part of Cabbies Do Kilimanjaro and we are looking forward to training together to reach the fitness and stamina levels we will need for the gruelling six day ascent. Despite the enormity of the challenge we are committed to summitting Kilimanjaro and raising thousands for the London Taxi Drivers Charity for Children and a charity looking after children in Tanzania.”

About Cabbies do Kilimanjaro

After successfully raising £18,000 for The Taxi Charity for Military Veterans in 2019 by losing 12 stones in weight, getting fit and climbing Kilimanjaro, two of the original Cabbies Do Kilimanjaro, Daren Parr and John Dillane, have put together a much bigger challenge for 2020.

A group of 30 London Licensed Taxi Drivers, will be attempting to lose 52 stones, get fit, with the support of Be Military Fit and then travel to Tanzania where Daren and John will climb 4,562 metre Mount Meru before being joined by the rest of the cabbies to climb 5,895 metres to the summit of Mount Kilimanjaro.

The Cabbies do Kilimanjaro team is hoping to raise £7,500 for the London Taxi Drivers’ Charity for Children and £2,500 for a children’s community project in Tanzania

For more information, to arrange interviews and to request images please contact: