On Sunday 19th January, the London Taxi Drivers Charity for Children’s Chairman Bradley Winfield welcomed around 600 children with special needs and their carers to the 48th Mad Hatter’s Tea Party at the JW Marriott Grosvenor House, before handing over to DJ Lee Raw to start up his decks. From this moment on everyone knew the party was going to be full of fun and energy as Action Amanda, a firm favourite with the children, took to the stage and got them up on the floor dancing and singing. Amanda’s passion for keeping children healthy and happy is amazing and she brought along Laura Church with some of her Body Buddies Nutrition characters to interact with the children also giving out good messages of healthy eating and looking after our bodies.

Next up a special performance by Elvis Shmelvis and lookalike Ray “Elton” Johnson who sang a medley of well-known Elvis & Elton songs before going on to have hundreds of photos taken with the children.

DJ Lee invited onto the stage three of the team from Cabbies do Kilimanjaro. Daren and John will be climbing Mount Meru before meeting 30 taxi drivers, including committee member Claire Zazzara, at the foot of Mount Kilimanjaro to climb this together. Funds raised will be split between the London Taxi Drivers Charity for Children and a community project in Tanzania and the charity is following their training process with sheer amazement at the challenge they are tackling – good luck to them all. 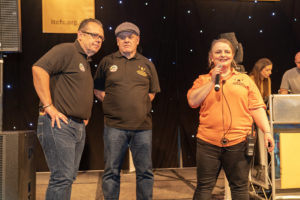 Fabulous singer/songwriter and top-ranking international beat-boxer Dana McKeon performed for the children and gave instruction on beat-boxing, which was a lot of fun. Dana was brilliant and the children loved her.

Next onto the dance floor were the wonderful Dance 21 a very special dance group of children with Down Syndrome who gave a brilliant performance. They were followed by the Crystals who amazed the children with their fabulous cheerleading routines.

Six Disney princesses from “Let It Glow” came to the ball and Elsa & Anna sang some new songs from Frozen 2. The final act of the party Donchez Dacres, finalist and David Walliams “Golden Buzzer” act from Britain’s Got Talent 2018, was a hit with the children singing a set that included his infamous “Wiggle Wine”.

In addition to those mentioned above there are so many other wonderful people to whom we give tremendous thanks:

And last but not least the volunteer drivers, helpers, and sponsors too many to name individually but we sincerely thank each and every one of you.

Thanks also to Chiswell Studios for making the below video for us…..