All food and drinks served on Friday 29th June day will be free when a donation is made to the charity. There will be delicious homemade cakes to purchase by way of donation and there will also be a raffle draw with some fabulous prizes up for grabs! 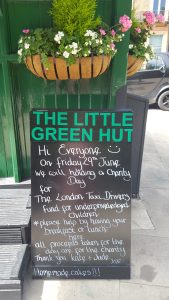 We are kindly being assisted by a team of volunteer London taxi drivers who will be fundraising for us on the day by collecting donations and donating their tips for the day.

Taxi drivers will be able to collect A5 posters (to display in their cabs) and collection tins from the Russell Square Cabmen’s Shelter from Monday 25 June.

About the Cabmen’s Shelter Fund

The Cabmen’s Shelter Fund was established in 1875 to run shelters for the drivers of hansom cabs and later hackney carriages.

Katie Simmonds has run the Cabmen’s Shelter at Russell Square for the last 4 years.