The USA-based TLPA described Bill Tyzack BEM as one of the world’s finest ambassadors of the taxi industry! This is his story…

Up until his death on 27th April 2017, Bill Tyzack’s name was synonymous with the London Taxi Drivers’ Charity for Children and until that sad day, Bill was still the Charity’s Honorary Lifetime President. But perhaps not as much is known of his and the Charity’s early days…

Bill first became interested in the children’s charity when along with wife Grace, he was invited to go on a children’s outing to Southend in the early 1960s. The outings had been running since 1928 thanks to the hard work of previous committees; however Bill felt that they could be improved and so began a relationship that started when he was invited to join the committee, serving first as Assistant Secretary and then becoming Secretary.

The Committee began running stag nights – drivers that remember those probably still feel too embarrassed to admit going (!!!) – and various other functions at places such as the Royal Garden Hotel and Lyceum. Some of these functions drew up to 900 guests and took much organisation. But Bill was organising and they were real money spinners for the charity…!

His work ethic led the Committee to asking Bill to become Vice Chairman – a position he accepted – and that eventually led to him becoming the Fund’s Hon Chairman. Along with his fellow committee members and their wives, he helped organise the Charity’s first trips abroad. In addition, there were the first Woburn outings for deaf children and the wonderful children’s Christmas parties at the Grosvenor House Hotel that have now been running for over 55 years. 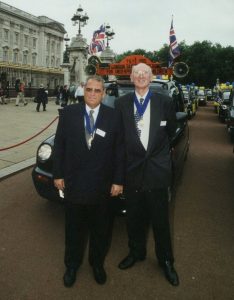 You only had to see Bill working at one of the functions to know how important the Charity was to him but he was always happy to help other charities get started and indeed to mix with those that were already operating. One such charity was The London Taxi Benevolent Association for War Disabled, which was also run by taxi drivers and led by fellow Dial-a-Cab driver, the late Harry Joel. 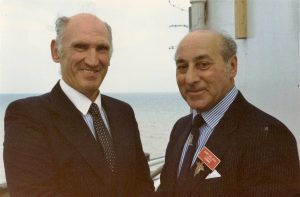 He was also passionate about his time with Dial-a-Cab, having joined them in September 1962. He once told the circuit’s in-house magazine, Call Sign:

“I have never wanted to work with any other circuit and have some wonderful memories of my time with the Society. I have been privileged to work under the Chairmanship of every DaC Chairman other than our founder, Bonnie Martyn. That takes in Frank Duncan, Jack Russell, Jack Taylor, Martin Gellman, Peter Fennymore, Phil Messias, Ken Burns, Aubrey Siteman and Brian Rice. I only had to ask for their help and the chances were that they would get me whatever I wanted for fear that I wouldn’t stop nagging them otherwise!”

Bill was honoured in 1984 when he was awarded a Community Involvement Award by the International Taxicab Association – nowadays known as the prestigious Taxicab, Limousine & Paratransit Association – for his work on behalf of the children’s charity – then still known as the London Taxidriver’s Fund for Underprivileged Children. Again speaking to Call Sign at the time and with typical modesty, he said he was accepting the award on behalf of the whole committee. He refused to accept that he was any more or less important than any other committee member. It was soon after that he was presented with the British Empire Medal for his services to charity.

The presenters of the Community Involvement Award finished by saying that not only was Bill Tyzack a good cab driver and an outstanding community servant, but that he was one of the world’s finest ambassadors of the taxi industry!

Bill Tyzack joined DaC in September 1962 – a year that also plays a significant part in his story. Bill told Call Sign just prior to his retirement in February 2013 about how the Xmas parties first began…

“It was in early 1962 when I heard of a new upmarket café opening in Park Lane that was offering taxi drivers free tea and cake when passing just to help spread the word. The café was part of the Grosvenor House Hotel – nowadays rebranded as the JW Marriot Grosvenor House – and the place where the Charity hold their yearly Children’s Mad Hatters party. Back in 1962, I was the Secretary and as I was in the area, I popped along to the café for my free tea.

“Whilst in there, a suited and booted gentleman who was obviously representing the hotel went round and began chatting to drivers. When he reached me, he asked the usual questions such as was it busy out etc so I took the opportunity of mentioning the Charity, which even back then was already over 30 years old. I gave him a brief résumé of our history. It was something I had repeated so many times to so many people over the years. I told him about taxi driver and former Norwood orphanage boy Mick Cohen, who in 1928 fulfilled his ambition of one day returning to the Norwood Home to take some of the children on an outing in his cab. Mick’s idea was to find 2 or 3 other cabbies to join him and take a few kids on an outing to the zoo. He had mentioned the idea to a few other drivers and 12 turned up to take fifty children on the outing! This was the same year that UK women had their voting age reduced from 30 to 21, Alexander Fleming discovered penicillin, Herbert Hoover was elected US President and the LTFUC charity was founded at the Leicester Square Taxi Shelter. Three years later, it made its first Southend outing and 34 years on down the line I was in the Grosvenor House Hotel’s new café speaking to this guy whose next question was whether there was anything the hotel could do to help the charity?

“I told him about our outings and mentioned that we’d love to be able to throw a Christmas party for underprivileged children. The next thing we knew was that the hotel’s Ballroom was handed over to us for a day! That became a yearly event, the only difference being that a few years later we moved to the hotel’s magnificent Great Room and we have been there every year since – courtesy of this hotel’s wonderful gesture.” 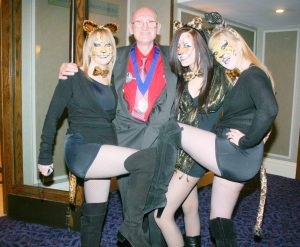 There isn’t much more we can add to what the highly respected Taxicab, Limousine & Paratransit Association said about William Tyzack other than to repeat their sentiments that not only was Bill a good cab driver and an outstanding community servant, he was one of the world’s finest ambassadors of the taxi industry! Bill would have said that his beloved wife Grace was behind much of his success in always being by his side and it would have been hard to disagree, but this is about Bill Tyzack, a man the taxi trade – as well as London Taxi Drivers’ Charity for Children – can truly say was a man to be proud of and much-missed… 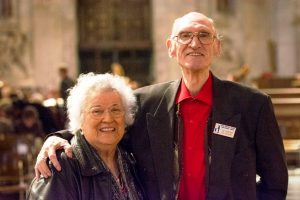 Our thanks go to Alan Fisher from Call Sign Magazine who wrote this wonderful article.

Previous StoryDonation to Norwood Lodge
Next StoryFundraiser at Burlington Arcade